The story of a dysfunctional husband.

This post was written as part of ‘No Tobacco Day, May 31.

Mr. Jawahar (36), married Ms. Kamini (34) (name changed on request), one of our women project beneficiaries, in 2015. This story of her unfortunate short marriage below is as narrated by Kamini.

“Back in 2014, I met Jawahar through our relatives and we immediately clicked. Everything happened so fast that we were married within 6 months after that meet. He used to smoke but it did not matter to me then and I assumed he would give up eventually. During our first night as a couple, we were trying to consummate but it was oddly unsatisfying. Except for the ‘thing that mattered’, Jawahar was acting all rough and animalistic and it scared me. I was a virgin (Read bout the ‘Abstinence-until-marriage practice‘ in India) and was not very keen about such matters and did not talk about this with anyone either for it was extremely embarrassing.  After months of numerous disappointing instances as such, I did my own research and found that what we were doing was completely unnatural and strange. I decided to have a talk with Jawahar and it turned into an ugly fight. The inlaws turned against me because I was “questioning their son’s masculinity“. Sexual counseling, education, and even the talks are highly frowned upon in India and that… broke up my marriage.

After huge fights and ultimatums, we decided to talk to a doctor. After checkups and tests, she concluded that Jawahar had ED, defective sperms and his roughness in bed was a psychological compensation. Jawahar had started smoking when he was 12 and eventually developed many underlying conditions including lung problems and the above-stated conditions. I waited for 2 years for him to give up his addiction, but it only worsened. I was not ready to waste my life and did not have the guts to watch him die, so I filed for a divorce.”

Her parents shunned Kamini from the family due to her decisions. They decided that her independent thinking would be a shame on the family. She did not regret the decision. With a college degree and some savings as capital, she started a little grocery shop in the neighborhood and joined our WoCTAD to pick up extra skills.

Smoking not only kills, but the health effects can have further effects on other aspects of life, such as Kamini’s marriage. SHAPE aims to see a harmonious world and we are disappointed that addiction continues to destroy lives. We pray for the Jawahars out there. We pray they realize that their addictions are killing the world around them as well. 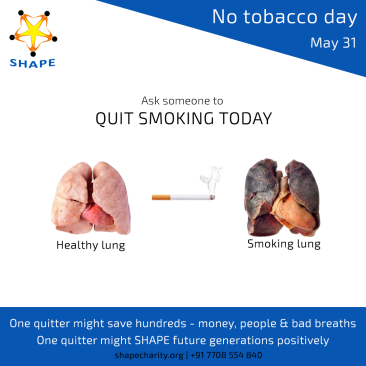