This article describes the current state of child laborers in the district of Tiruvannamalai.

When local governments prohibit local child laborers, business owners simply hire children from other states in the country. Children are hired for cheap labor, they can more easily be exploited without consequences (a child will not be as vocal as an adult when sexually assaulted), and they generally lack knowledge about labor/human rights. Learn more

According to a recent survey conducted in SHAPE’s project areas, 1 out of 10 children are being forced to work after school. 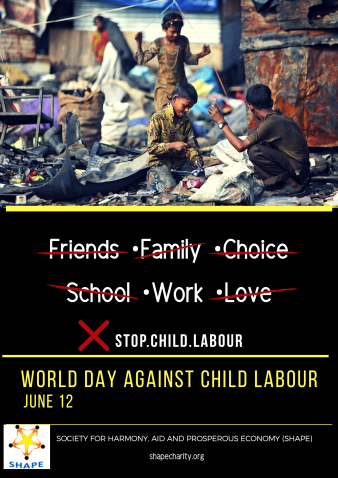 Groups of nomadic families (migrant workers), are the main source of child laborers from the northern parts of the country and can be found living in tents around Tiruvannamalai. They are employed in agriculture, food/refreshment services (e.g. chai kiosks), brick making, granite/sandstone industries, spinning industries, garment factories, cigarette factories, quarries, scavenging, domestic services, illegal activities like commercial sex, drug supply, theft & begging, recruiting other children for these illegal activities, and some even work for local terror groups, by helping with arms dealing/trafficking and commercial killings. These children are often denied basic human rights by their own families and their employers.

Additionally, the Education & Child Labor Eradication Departments are known to be more concerned about the children listed on ration cards (the Indian version of US Green Cards). “With a few exceptions, almost 80% of the documented children in the district are in school“, says a department official. That still leaves out thousands when the population of the district is 2.5 million, with over 25% of it being children. The official also failed to provide a statement about the children who work after school.

With that being said, the departments fail to screen the nomads. These migrant workers leave their native places just to find “better work opportunities” in the hopes of improving their financial status.  Tamil Nadu is able to fetch just a few tens of rupees in excess, and this remains one of the main reasons for the migrant workers to migrate and stay here.

SHAPE has even heard about children dropping out of schools because the syllabus is supposedly hard. When we dig a little deeper, we often find the reason to be teachers (few not many) who are incompetent and lack the necessary skills to work with slower learners. Dropouts are made to earn a livelihood for their families on their own by their parents. Some do so without much remorse because of how nerve-racking making ends meet has become for them. Rural people still lack awareness about the importance of education. We begin to understand that every stakeholder here is to share some portion of the blame.

Our organizational measures to eradicate child labor prove to be effective until a child finishes high school. After this period, the parents assume that the family must be rich for their children to further receive higher education. This is true to some extent. In India, a child has to be extremely intelligent or rich to get into good schools/colleges. The remaining 95% of the young population either goes to work or is enrolled in tier 3 colleges, only to be left unemployed after studies.

Being a girl is even worse. If you are a girl from a poor Indian family, you will be cruelly-treated because of the misogynistic ways of life prevailing widely in the country (Read – Indian mentality towards women), right from childhood until marriage – which will be forced upon you soon after you finish school. The girls from middle-class/rich families do not have it easy either. Many girls in the country are pursuing a college degree because of their hatred towards early marriage.

SHAPE boldly fights against this issue despite the struggles and political pressure (Read here about our struggles with child labor eradication). We can only plead with policymakers to consider all these factors while working towards making the country a better place to live in.

Read here to know what we do to minimize child labor count in the country.